Below is a picture I took the first time the little man went trick or treating. He was dressed as Count Dracula. We had to cut the pants because it was way too long for him. The costume was for a bigger kid, see? We did not go to the store until the day we were going trick or treating so there were not much costumes to choose from. Anyway, the costume still fit over his clothes so it worked well. This was taken at his older sister's house. He would have wanted to just watch tv instead of knocking on people's doors for treats but we told him he will get goodies so he went. I bet he was disappointed when he got candies. The poor thing never gets excited when Halloween gets near even if kids around him are. I may have a party pooper here, lol. I don't blame him though. I was like him when I was a kid. I would rather stay home and read a book than go with my cousins somewhere for their idea of fun. I have not bought any costumes this year but I might if I find something cheap. The little girl already has a costume courtesy of her sister. We only have to look for one for the little man. 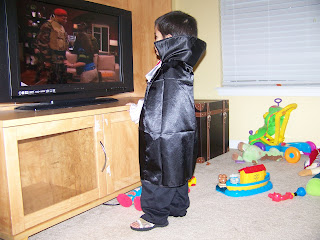