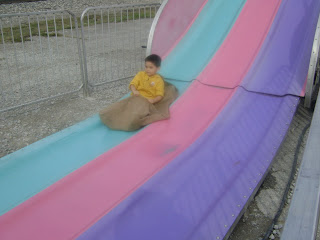 There was some kind of festival near where we live and since we did not have anything to do, we decided to go and see what it was all about. We were glad we went because we all had fun even if we did not stay long. The little man got to ride in a merry-go-round twice where he was thrilled to be sitting on a zebra. He also got on a slide once and he said it was pretty cool. He never would get back on it though. It was a pretty long slide with bumps and I could tell he did not know what to think while he was sliding down. I took a couple of pictures but I was not quick enough nor was my camera up to the task so I ended up with the picture above. He then got on another ride before we headed home. He said he had so much fun. We rarely go on excursions like this so he was thrilled when we did. He asked to go back but it was the last day so we told him we will go next year if we still live here. The place was packed with people and the smell was heavenly what with all the little booths with various food in them. Since the husband and I are on a diet, we only bought fried onion and had to be content with that. It was nice and made me think why they don't do festivals or activities like that often enough. Like maybe twice a year? But then on second thought, it might not be as fun if it happens often.
Posted by Poray at 9:14 PM