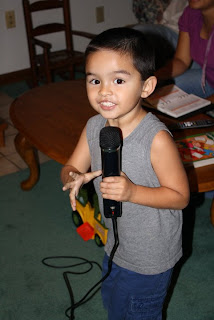 The little man on one of his good moods belting out Elvis Presley's Suspicious Minds at a friend's house. I thought bringing him to a little gathering was a bad idea but I was wrong. Once he saw my Filipina friends singing and dancing using the Magic Sing his face lit up and he grinned from ear to ear. He knew he belonged, lol. He sang his favorite songs from Lady Gaga to Maxine Nightingale, to the King, and even Justin Bieber's. He did not only sing, he danced as well much to the girls' delight. When he did not know the song, he read the words which was funny considering how fast the words were flashing on the television screen. I did not have any problems with him acting up or anything like that that time. He was in his element and I was happy. I think we could do this again :)
Posted by Poray at 7:32 AM

Hurray to your future singer!Way to go!^_^