The husband complained that I have not taken pictures of the little man lately. I told him there is a reason for that and proceeded to show him the pictures I took on different times. Below is what I get after I told the little man to smile for the camera. See how goofy he looks? He refuse to be still for a nice picture. We are back to plenty of pictures of heads, eyes, legs, sometimes shirts in a blur. I have not send any pictures to his grandparents in Leyte because of this problem. I could not send pictures of his eyes to his grandparents, could I? I only got lucky to get a face shot because he was strapped. If he wasn't I would have been lucky to take a picture of his hair. 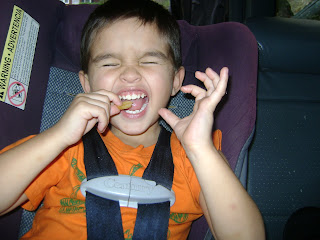